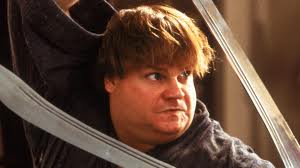 The original ‘Beverly Hills Ninja,’ starring Chris Farley, is set for a sequel to lense mostly in Korea.

In January, the company announced that it exchanged a memorandum of understanding concerning international DVD distribution with Sony Pictures Worldwide Acquisition Group.

Produced by Motion Picture Corp. of America and helmed by Dennis Dugan, the original “Ninja” was handled by Sony units TriStar Pictures and Columbia TriStar Films in multiple territories.

Mitch Klebanoff, a writer and co-producer of the original film, has scripted and will helm the sequel. Story involves an orphaned boy who wants to be a ninja but becomes involved in a crime in Hollywood while looking for his real parents.

More than one option

(Co) Daily VarietyFilmography, Year, Role (Co) Daily Variety Company says some 70% of the pic will shoot in South Korea, with 30% in the U.S. Klebanoff is skedded to visit the Busan Film Commission on Saturday to finalize the schedule.

Pic is skedded to wrap its Korean shoot on Nov. 20 and continue Stateside until the end of December. Sony is eyeing a May release date in U.S. and June in South Korea. Distribs for Korea and other international territories have not yet been secured.

Companies will hold a press conference with Klebanoff and stars in attendance on Oct. 4, during the Pusan Festival.